Demining of forest in Croatia
December 15 2020

In 2021 Croatia is still dealing with mines and other explosive remnants from the 1991-1996 war, and these still affect the safety of the local population.

Since the war in the 1990s, Croatia has had a large number of km2 contaminated by mines and explosive remnants of war. Mines represent a threat to the life and safety of citizens and also prevent the exploitation of agricultural and forest areas.

The contaminated territories, being areas covered by dense vegetation, are difficult to access and demining works require enormous financial resources and time.

This issue requires greater attention also at European level as this situation restricts the freedom of movement of people and causes many deaths even today.

In terms of economic resources, it was projected that the completion of land demining will cost more than 600 million euros.

In relation to timing, considering international treaties, Croatia by March 2019 should have destroyed all mines. This deadline was extended until 2026 as, despite national and European investments, demining takes much longer.

Within this context, a demining process was initiated with the financial contribution from the Croatian Government and the European Union with the aim of giving back to the population their safe and clean land and forests.

The Croatian partner in the FOREST project, Croatian Wood Cluster, plays a relevant role as a stakeholder in the Naturavita project, which aims to demine, restore and protect forests in the Danube-Drava region.

It is a project, started in 2015, which is expected to end in 2023 and has been funded by the European Structural and Investment Fund (ESIF). Through this initiative, the importance of biodiversity and sustainable forest management, water-related ecosystem services, and the dangers of mine contamination are being brought to public attention through awareness-raising activities.

Since this is an ambitious project, the results will also be achieved through the development and implementation of training programs for students and the population, as well as for workers and experts in the forestry sector.

Although demining is progressing slowly, three years after the start of activities Croatia had already reduced the dangerous area to 411.5 km2, thanks to the use of innovative detection technologies. During the same period, 37.326 mines, of which 19.815 anti-personnel and 17.911 anti-tank, and 47.894 unexploded ordnance were detected and destroyed. 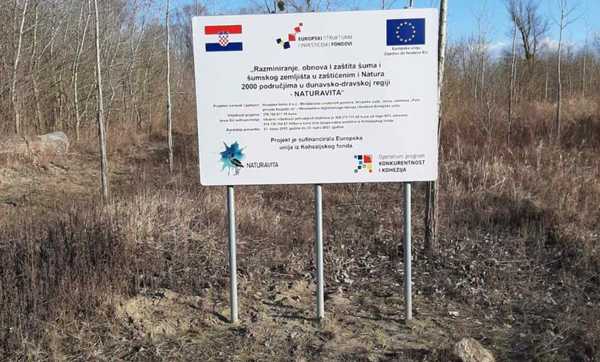